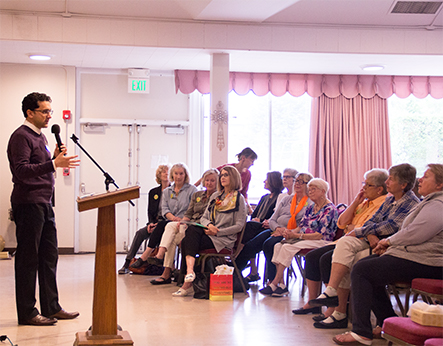 Grandmother’s Against Gun Violence (GAGV) presented Ali Rowhani-Rahbar, M.D., Ph.D., with a second $10,000 contribution Tuesday to support firearm research conducted at the University of Washington’s Harborview Injury Prevention and Research Center and the Department of Epidemiology in the School of Public Health (UW SPH).

“This work was made possible entirely by your generous gift,” said Rowhani-Rahbar, Associate Professor of Epidemiology and HIPRC violence prevention section lead and, at the group’s quarterly meeting, noting that their contributions represent a potentially transformative model for supporting firearm research. “This really does serve as a truly unique source of funding for work like this.”

The group’s first contribution to the Gun and Responsibility and Injury Prevention Research Fund, presented in September 2017, funded an analysis led by epidemiology doctoral student, Erin Morgan, on the relationship between firearm ownership, storage practices and suicide risk. The study examined data from the Behavioral Risk Factor Surveillance System, a survey that collects data on a broad range of health and behavior topics, and was published today in the American Journal of Public Health.

The study found that 63 percent of survey respondents living in firearm-owning homes do not store the firearms both locked and unloaded, which is the recommended safety practice by national health and firearm organizations. There was no statistically significant difference in mental health indicators between those living in firearm-owning and firearm-nonowning homes.

Going forward, Rowhani-Rahbar highlighted the many research gaps that remain to be addressed. With the new gift from GAGV, he and Morgan will continue to examine the survey with a focus on understudied populations, such as households with children, veterans and the elderly.

“[The elderly] are a highly important sub-population. We know little about their interactions with firearms,” Rowhani-Rahbar said. “We have plenty of questions to answer.”

Washington state legislators Sen. David Frockt and Rep. Ruth Kagi also spoke at the meeting about recent legislative proposals regarding firearms, and GAGV announced that the gift to Rowhani-Rahbar’s research was made in Kagi’s honor for her long-time focus on firearm safety policies.

GAGV is an organization that “works collaboratively with other groups to reduce gun violence and remedy the complex societal factors that contribute to a culture of gun violence,” according to their mission statement. They are a nonprofit, nonpartisan group that promotes civic engagement around policies, education and research intended to reduce gun violence. The group was founded in 2012 in response to the Sandy Hook Elementary shooting in Newtown, Connecticut.

The Harborview Injury Prevention and Research Center(HIPRC) focuses on injury cause and prevention research and is affiliated with the University of Washington and Harborview Medical Center. Its mission is to reduce the impact of injury and violence on peopleʼs lives through research, education, training and public awareness. HIPRC does not advocate for or against gun control; the center’s work focuses on providing resources, data and expertise to help guide evidence-based programs and policies to create safer homes and communities as part of Violence Prevention. Learn more at www.hiprc.org.