Featured Faculty: From Physicist to Physician

Featured Faculty: From Physicist to Physician 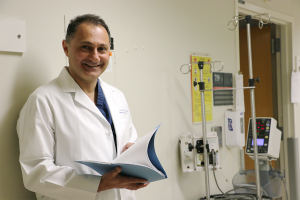 Even as a young man, Dr. Saman Arbabi abhorred violence. He developed his views on the subject early – growing up in Iran, he saw the devastating effects of violence in both the Iranian Revolution of the late 1970s and the Iran-Iraq War of the 1980s. He watched his father, a doctor, work to save people who had been injured in the fighting. After Arbabi left Iran, those memories left a deep impression.

When Arbabi immigrated to the United States alone at age 17, he had no intention of becoming a doctor. Physics had always been his passion, and after high school that’s what he studied at University of California, Berkeley. He worked through school as a forklift operator, late-night gas station attendant, and then a research assistant, always with the goal of becoming a physicist.

But upon graduation, Arbabi was confronted with an uncomfortable truth: most research jobs in physics were focused on military applications. To Arbabi, such work would ultimately lead to more violence in the world. “I would change my entire career on it, and I did,” he said.

He took admission exams and applied to medical schools. Upon his admittance to UC Davis School of Medicine, Arbabi’s path was set – he would build a career out of helping the victims of the violence he so strongly condemned.

He went on to complete his residency in University of Washington’s Department of Surgery. In 2001, he completed both a Master of Public Health at University of Washington and an HIPRC T-32 postdoctoral fellowship, a program where he now serves as a teacher and mentor as well as the HIPRC section lead for Injury Care. The fellowship influenced his approach to research, and he strives to pass those lessons on to the next generation of injury researchers.

“I started looking at a problem not just one way, but multiple ways. I learned better brainstorming, how to better involve other disciplines,” he said. “The fellowship certainly modified my perspective.”

Arbabi continues to find immense satisfaction in being a physician, especially in the level of trust he can have with his patients.

“It doesn’t matter who you are. When you come to me with my white coat, the only thing you expect of me is help. My job is not to judge,” he said.

That point of view is also why he chooses to work at Harborview Medical Center, which is dedicated to the philosophy of “Exceptional care, without exception.”

While Arbabi may not be the physicist he once thought he would become, he still fosters interest in quantum mechanics and science fiction and applies his research skills to injury care. Currently, his research interests focus on long term outcomes of trauma and burn patients. He’s also exploring inflammatory signaling modification, which changes how the immune system responds to tissue injury, as a way of improving outcomes.

Going forward, Arbabi plans to continue building collaborative research, mentoring young medical professionals and improving his patients’ lives. By reducing the burden of violence on its victims, he also continues to follow the values he learned as a young man and forge a career helping others.