HIPRC Announces Launch of a Digital Campaign for Suicide Prevention 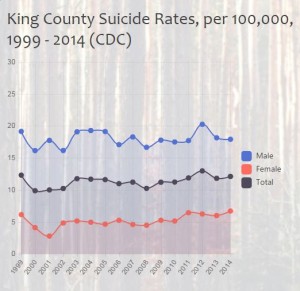 The program, implemented in partnership with Harborview Medical Center, comes at a critical time for Washington residents. Already higher than the national average, the suicide rate in Washington is on the rise. In the past decade, nearly 10,000 Washington State residents have died from suicide; half of these deaths were firearm-related. In 2014 alone, 1,111 Washington residents, including 53 adolescents and children, died by suicide.

A major component of the program targets the most lethal suicide method – firearms. Restricting access to lethal means by those most likely to harm themselves is considered a critical component of evidence-based suicide prevention strategies and is widely recommended by mental health and public health professionals.

“This initiative encourages safe firearm storage for everyone, but particularly in families with individuals at risk for self harm or suicide,” said HIPRC project lead Dr. Joe Simonetti. “The emphasis on firearms is based on the fact that around 85% of gun-related suicide attempts result in death, while only 5% of all other methods combined result in death.”

The program leverages social media as recent related studies have shown that gun owners are increasingly active in the digital realm and there is early research that shows gun violence can be predicted via social media. At a recent community-based firearm injury prevention event sponsored by HIPRC and Seattle Children’s Hospital, nearly 50% of participants reported learning about the event from social media.

In addition to working with HMC, HIPRC will work with the support of Seattle Children’s Hospital.