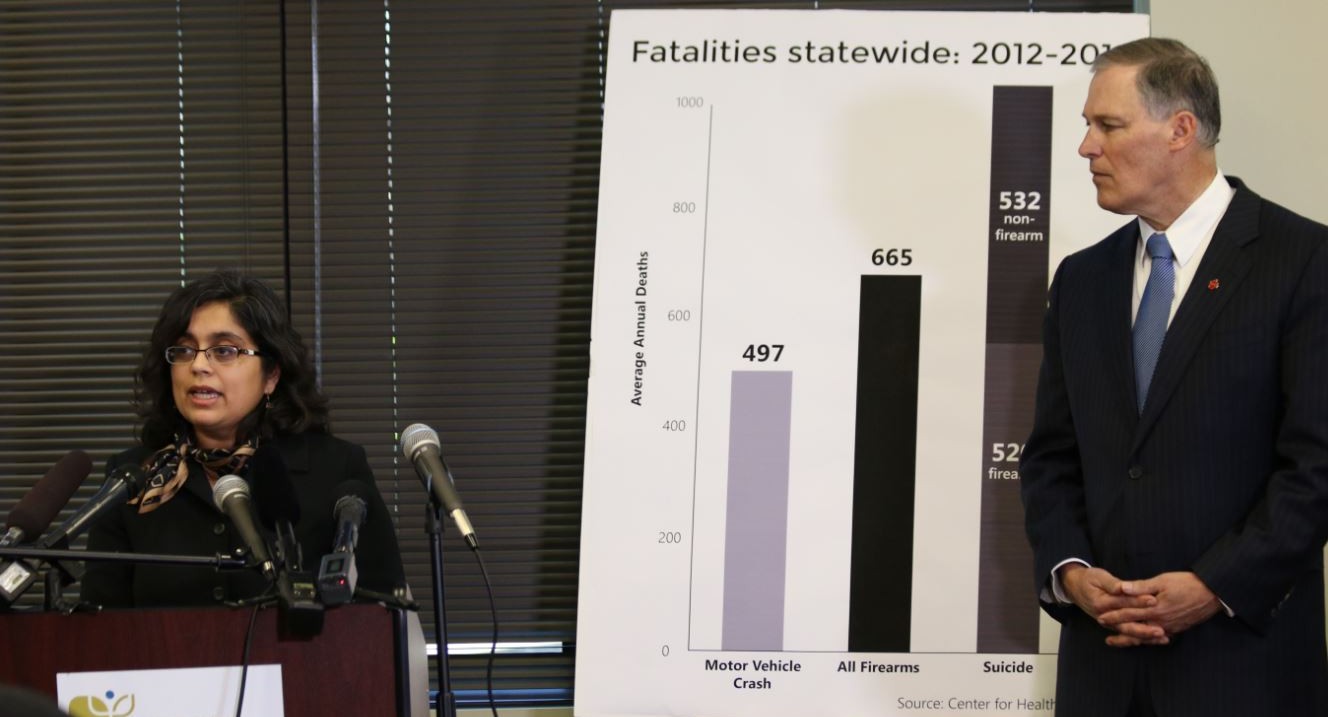 On Wednesday, January 6, Dr. Monica S. Vavilala, director of the Harborview Injury Prevention and Research Center Director  stood with Governor Jay Inslee as he announced a groundbreaking public health initiative to curb gun violence in Washington State. Governor Inslee’s executive order to prevent firearm fatalities comes on the heels of President Obama’s executive order to reduce firearm violence nationwide, making this an historic week for a state in which firearm fatalities are the leading cause of injury-related death.

At the event, one day after making a strong case to KING 5 News for securing firearms, Dr. Vavilala introduced an innovative firearm suicide prevention program being launched by HIPRC, in partnership with Harborview Medical Center. In King County, suicide by firearm accounts for 70% of all firearm fatalities. The initiative, led by HIPRC faculty Joe Simonetti, MD, MPH, will encourage safe gun storage for everyone King County, but particularly in families with higher indicated risk for suicide. With support from Governor Inslee and the Department of Health’s, we look forward to rolling this program out statewide in the near future.

Governor Inslee also stressed the importance of incorporating a data-driven approach to reducing firearm violence. HIPRC stands ready to assist in that endeavor. In fact, in addition to our suicide prevention program, we are launching a study, co-funded by the City of Seattle and the Department of Justice, which utilizes evidence-based methodologies to reduce the likelihood that a gunshot victim ends up back in the hospital – something that happens 21 times more than those who aren’t shot. The results of this study, which we will share with our cohorts in Governor Inslee’s office, will help us better understand the factors that contribute to firearm violence in our communities. You can read more about this in Seattle Met magazine’s feature of Dr. Ali Rowhani-Rahbar, who is leading the study.

While the politics surrounding gun violence are increasingly divisive, we are encouraged by the willingness of our local and state governments’ desire to reduce the alarming injury burden of firearm violence in our communities.  HIPRC does not advocate for or against gun control; rather, we let our work pave evidence-based pathways towards safer homes and communities.

For example, Dr. Frederick Rivara’s research at HIPRC has resulted in the publication of thirteen published papers on firearm violence, including seminal works on the relationships between firearms in the home and subsequent injury, homicide, and suicide.  Most recently, Drs. Joe Simonetti and Rowhani-Rahbar, et al, looked at the correlation between state firearm regulations and nonfatal firearm injuries, showing that stricter firearm legislation is associated with lower hospital discharge rates for firearm injuries.

All of us at HIPRC are troubled by the toll of gun violence in our communities. This is why we, as a group of scientists, will continue to find ways to research the issue just as we ask our governments and research institutions to try and find resolutions to other problems that plague our society – from traffic accidents to cancer.