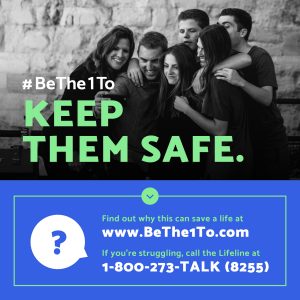 In 2015, more than 44,000 people died by suicide in the United States, making it the tenth leading cause of death, according to the Centers for Disease Control and Prevention.

Many suicide experts have come to view suicide as part of a process, which means that there are multiple points where intervention could reduce the risk that someone will have suicidal thoughts or behavior. Research and experience indicate that suicide is preventable – and there are steps that you can take to reduce the risk of those close to you.

In an acute crisis, when someone is actively thinking of harming themselves, there are a number of concrete suicide prevention steps to take: ask them directly, remove lethal means, listen without judgment, connect them to help and follow up.

One important preventative step is to limit access to lethal means in the home, particularly medication and firearms.

For firearms, that means keeping guns unloaded, locked and separate from ammunition.

Medication should also be locked, especially if someone in your household is at risk for suicide, and unused or expired medication should be disposed of properly. Getting shorter prescription refills will also minimize the amount of medication available at any one time.

To illustrate, he discussed suicide trends around gas ovens in England, which were a highly accessible and lethal means of suicide by carbon monoxide poisoning during most of the 20th century. In the late 1950s, England began to switch from coal gas, which has a relatively high carbon monoxide content, to natural gas, which has almost no carbon monoxide. The new gas was far less lethal, and suicide rates using ovens dropped dramatically. Rates of other suicide methods rose a small amount, indicating some substitution of means, but the overall suicide rate fell. Similar correlations have been found in other cases where lethal means became less accessible, which suggests that lives can be saved by changes in consumer habits and household access.

In Washington state, firearms were used in 51 percent of suicide deaths in 2012 according to the Washington State Department of Health, and poisoning accounted for 19 percent of suicide deaths. Ongoing safe storage campaigns, such as King County’s LOK-IT-UP Program for safe firearm storage and initiatives from the Washington Poison Center, hope that improving safe storage rates in Washington could help reduce both intentional and uninintentional death and injury. HIPRC researchers also continue to examine how safe firearm storage impacts death and injury rates.

Suicide is not inevitable. National Suicide Prevention Awareness Month ends with September, but awareness of suicide prevention and commitment to safe storage practices can reduce the risk of suicide in your community.