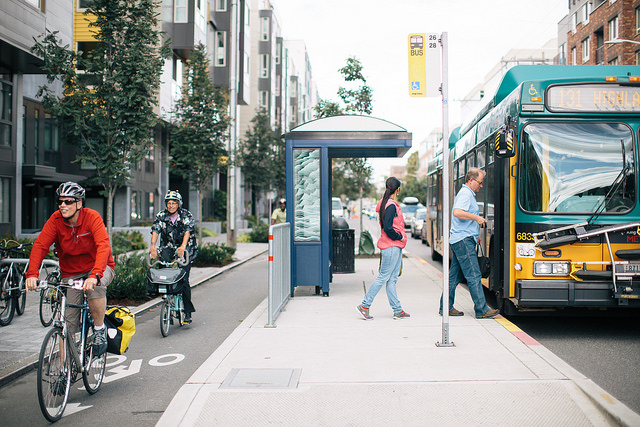 Today is National Bike to Work Day, encouraging bicycle commutes for benefits to both health and the environment – but safety concerns may motivate some potential riders to drive rather than bike.

Some communities have responded with Complete Streets initiatives, which focus on changes to street design to improve safety for all road users: drivers, pedestrians, bicyclists and transit riders. These safety measures can include bicycle lanes, wide shoulders, median islands, frequent crossing opportunities and other design choices.

A new study from HIPRC researchers, published this week in the American Journal of Epidemiology, found that counties that implemented Complete Streets policies saw an increase in their bike commuter population and a decrease in the rate of bicycle fatalities from collisions with motor vehicles. These findings suggest that bicycling is a safer and more attractive option in communities with Complete Streets.

“Our analysis indicates that Complete Streets policies encourage people to ride bikes. With more people riding, we may see just as many crashes in total, but each individual trip is safer,” said lead author Steve Mooney, Ph.D., an epidemiology research fellow at the University of Washington’s Harborview Injury Prevention and Research Center.

Over 16 years, the studied counties saw 5,254 cyclist deaths, or about 34 per 100,000 cyclist-years. Based on their analysis, researchers estimated that had policies been in place across all 183 counties over the 16 years, it would have averted 2.8 fatalities per 100,000 cyclist-years, reducing the risk to cyclists by about 8 percent. While the overall population of bicycling commuters rose by 2 percent, the overall number of fatalities rose by only .7 percent, indicating that individual cyclists were less likely to be killed in a collision with the new policies in place.

At the beginning of the study period, 14 percent of the included counties had Complete Streets initiatives, and by 2015 that number had grown to 72 percent. Researchers defined Complete Streets initiatives as legislation, resolutions, internal memos or executive orders that directed transportation planners to consider safety of non-motorized road users, including bicyclists, when planning streets.

Past transportation research has demonstrated safety in numbers when it comes to transit – areas with higher pedestrian and bicyclist populations, regardless of other features, generally have lower rates of pedestrian and cyclist injuries and fatalities, study authors noted.

“Complete Streets are part of the larger picture of bicycle safety. Riders can also reduce their risks by choosing routes that separate bikes from cars and wearing a helmet for every trip, which research has shown to be an effective way of preventing injury,” said pediatrician and HIPRC core member Fred Rivara, M.D., MPH, a long-time researcher of bicycle injuries and a co-author on the study.

Based on the national data available, the study examined only bicycle fatality rates, not injury rates, which are far more common. The authors noted additional research is needed to clarify the impacts of Complete Streets initiatives, such as effects on children and teen cyclists, seasonal variations in cycling related to Complete Streets and how policy variations impact commuters at the community level.