Suicide Prevention Awareness – What Can I Do?

Suicide Prevention Awareness – What Can I Do? 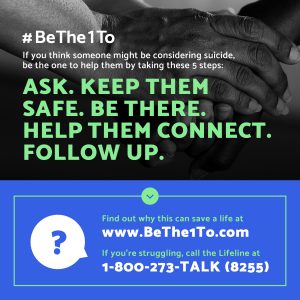 September is suicide prevention awareness month, a time to highlight the steps individuals can take to support loved ones who might be thinking about suicide. Evidence suggest that straightforward, concrete actions in response to a person having suicidal thoughts, including asking about suicide directly, reducing access to lethal means, being there, connecting to support, and following up, can help save lives.

The National Suicide Prevention Lifeline (1-800-273-8255) says that the following behaviors may indicate an individual is thinking about harming themselves, especially if these behaviors have changed or increased recently.

Certain populations are also statistically more vulnerable to suicide, including American Indian and Alaska natives, veterans, LGBTQ individuals, and older men. If you are thinking about suicide, call the National Suicide Prevention Lifeline at 1-800-273-8255.

The National Suicide Prevention Lifeline highlights the following steps to #BeThe1To help someone thinking about suicide:

These steps have been proven to be effective at reducing and preventing suicide. Most people who consider suicide or survive a suicide attempt do not end up dying by suicide, and the actions of the people around them can make a difference. Learning to identify warning signs and then ask directly, keep them safe, be there, help them connect, and follow up can save lives.