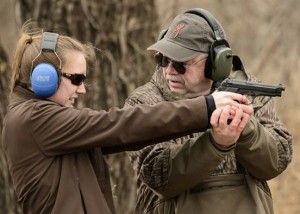 A new study by HIPRC researchers estimates that only three out of five gun owners in the United States have received formal firearm training.

“Formal firearm training among adults in the USA: results of a national survey” was published July 11 in Injury Prevention. HIPRC Violence Prevention section lead Ali Rowhani-Rahbar, M.D., Ph.D., MPH, was the lead author on the study, and HIPRC Graduate Research Assistant Vivian Lyons was a co-author.

According to the study, about 61 percent gun owners reported they had received formal firearm training in a national survey. This rate of training was not meaningfully different than the previous most recent estimates in 1994. Among gun owners who received training, the content of the training varied widely – only one in seven, or about 15 percent, reported that their training included suicide prevention. Firearm access and suicide have been linked by previous research, and suicides account for two-thirds of firearm deaths in the U.S.

The authors of the paper also noted that for non-owners who lived with someone who owned a gun, only 14 percent had received any kind of formal training with firearms.

Given the results of the study, the researchers called for additional research into the scope and content of firearm training programs in the U.S. as well as for the inclusion of suicide prevention into such programs.

Researchers from the University of Colorado-Denver, Harvard University and Northeastern University also collaborated on the study, which was funded by the Fund for a Safer Future and the Joyce Foundation.