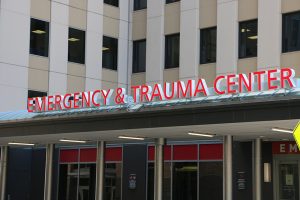 Core members of Harborview Injury Prevention and Research Center are calling for greater national attention on gun violence and emergency bleeding control following the mass shooting in Las Vegas that killed 58 and wounded more than 500.

Speaking through a number of media channels, members pointed out the vast impacts of gun violence and mass casualty events in America.

Core member and pediatrician Fred Rivara, M.D., MPH, said the tragedy in Las Vegas is terrible – and will account for only some of the thousands of deaths by guns in the U.S. this year, including suicides, he told Crosscut.

“We are constantly preparing for such a thing; we hope it never happens,” Bulger told Q13 Fox. “Whether any community can be totally prepared for that I don’t know, but I think we’re doing our best to be prepared.”

For the public, Stop the Bleed trainings, available for free at Harborview Medical Center, teach participants to identify and stop potentially fatal bleeding until emergency responders can take over.

In mass casualty events such as shootings, a rapid, correct response from a bystander can determine whether a victim survives. Bulger and the Stop the Bleed courses were featured in a story on King 5.

HIPRC is committed to the study injury and prevention, including gun violence. Learn more about our Violence Prevention section, led by Ali Rowhani-Rahbar, M.D., Ph.D., MPH.

Among other things, HIPRC researches and performs community outreach surrounding safe usage and storage of firearms. We do not have a position on or advocate policies surrounding gun ownership.