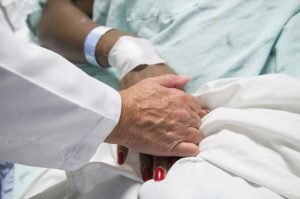 People who have experienced trauma have a higher risk of suicide. Such a link may seem intuitive – and it has also been corroborated by a number of studies – but many questions remain about when, how and why past trauma can lead to suicide.

Ongoing research seeks to better understand the impact of trauma on suicide risk, explicate the pathway that leads from traumatic events to suicide, and improve care for trauma victims.

According to the National Center for PTSD at the U.S. Department of Veteran Affairs, studies have shown that past childhood abuse, past sexual abuse or post-traumatic stress disorder are all predictors that an individual is at a higher risk of suicide. A 2015 study co-authored by HIPRC associate member Nancy Temkin, Ph.D., M.S., found that individuals with past spinal cord injuries had higher rates of suicide ideation and lifetime suicide attempts than the general population.

Many types of trauma are considered to increase the risk of suicide, with trauma broadly defined along the lines of the fifth edition of the Diagnostic and Statistical Manual of Mental Disorders Criterion A on PTSD. By this definition, trauma can include experienced, threatened or witnessed death, serious injury or sexual violence, or even indirect exposure to “aversive details,” often through professional roles.

One possible explanation for this link is the Interpersonal-Psychological Theory of Suicidal Behavior, first published in 2005 by Florida State University psychology professor Thomas Joiner. Part of the theory posits that individuals develop “the acquired ability for lethal self-injury,” meaning that death by suicide is the culmination of a process that unfolds over time wherein a person becomes more able to enact self-directed violence. Viewed through this framework, trauma or repeated trauma may potentially reduce individuals’ fear of pain and death and raise their risk of suicide. However, researchers note that more work is needed examining this process.

Investigation into the relationship between trauma and suicide could help identify timelines and methods for incorporating suicide prevention into trauma treatment.

“If you understand this is a pathway that evolves over time, you get points of intervention,” DeCou said. Knowing when and how those points occur is vital to effectively reducing the risk for suicide among trauma victims, he explained.

In one example, a 2017 study examining childhood trauma and suicide ideation also found that children with certain types of trauma, such as physical abuse, emotional abuse, or neglect, were more likely to develop anxiety. The researchers hypothesized that anxiety symptoms may explain the link between childhood maltreatment and suicidal ideation, and thus suggested that proactive identification and treatment of anxiety in child abuse victims may ultimately help reduce their risk of suicide.

DeCou points out that more research is needed, but such inquiries are a promising avenue to improve suicide prevention among trauma victims by identifying and treating the consequences of trauma that may in turn lead to suicidal thoughts and behavior.

If you are in crisis and considering suicide, call the National Suicide Prevention Lifeline at 1-800-273-TALK(8255).